This case study was conducted as a training regiment for one of my clients, a 6-month-old Coonhound puppy named Bunny, who developed food obsession and aggression at a very early age. You will learn how I addressed her food obsessive behavior as well as aggression around people, and how this training naturally translated to her behavior with food around other dogs.

Bunny, a 6-month old Coonhound puppy, was found in neglect near York, PA in January, 2017. She arrived at an emergency vet in the care of a Good Samaritan. The man saw a woman dragged the puppy down the street on a leash and stopped to see if they were okay. The woman handed Bunny to him and walked off. The vet discovered that Bunny had been starved, had worms, and was anemic due to an infestation of fleas and ticks.

The Good Samaritan could not take in Bunny as a foster, and asked a friend if she could take her in either to adopt or to foster until she was spayed and put up for adoption through a local hound rescue. The friend, Dana, agreed and took Bunny in, where the family had 2 dogs: an 11-year-old Basset Hound named Brewster, and a 6-year-old Sheltie named Daisy.

Dana saw the first signs of aggression in Bunny very early on. With both food and water, Bunny would leap, bark, bay, and nip at Dana as soon as she picked up the food or water bowl. She would pounce on the food bowl at dinner time, often spilling it across the kitchen floor. Finally, there was no way to take the bowl from Bunny once she had started to eat. She would not only guard the food bowl, with or without food in it, she would try to eat the bowl after the food was gone.

Knowing her history, it was clear that 2 possible core causes brought about this behavior:

Narrowing down the root cause of the behavior into these choices provides perspective for the trainer and owner on how difficult it may be to undo the behavior and replace it with a healthier behavior. If a dog’s behavior developes through a learned experience, it usually takes less time to ‘untrain’ that behavior than if the dog is reacting out of instinct. In this case of learned behavior, I knew it was a treatable situation.

A dog’s breed and personality can both be factors in determining the proper training technique. For Bunny, I considered her loyalty and instinctual want to surrender a food-like object as she would during a hunt. I also spent some time understanding her personality – a docile, eager, and very energetic puppy looking for a job to do.

It was clear to me her aggression was purely a learned behavior due to her previous life circumstances, which would make the training process much easier. However, there was an underlying sense of distrust in her personality, especially when food was involved. This distrust would be the main obstacle to her training, and therefore the key to her recovery.

I decided that to curb her aggression, Bunny needed to learn how to trust her owner completely, especially with food. To do this, I instructed Dana to start by hand-feeding Bunny. I demonstrated the food introduction and feeding process to Dana as follows:

After 2-3 weeks of hand feeding without and then with the bowl, we allowed her to eat out of the bowl directly.

We worked with Bunny over the course of about 8 weeks. Dana decided not to adopt Bunny, but continued to foster her until she was adopted through the Hound Rescue. During her last week of training, a hound owner in Connecticut filed the paperwork to adopt her. The new owner, Tiffany, owned a Redbone and a Platt Hound, both fairly well-behaved already.

To help Bunny and her new owner become a strong family, I provided Tiffany with a first-day program to introduce Bunny to her dog sisters.

My training program for Tiffany was simple:

Tiffany followed this program and had absolutely no signs of aggression from Bunny, a huge success. The following morning, however, Bunny displayed aggression. She defended her food from the other dogs even though they showed no interest in the food. After discussing the incident in detail, I noted that Tiffany had not taken the dogs for a walk prior. This step was crucial for the first few weeks to reinforce the dogs’ relationship with each other and with her. Bunny was still in a strange place with strange dogs and people. She needed time and reinforcement that this was her family now, and they could be trusted.

Since this incident, Bunny has all but forgotten her aggression issues of the past. She now calmly waits for her food beside her sisters and is truly calm and happy with her new family.

If you are experiencing food aggression with your dog or any other behavioral issue, please email us at virginia@ghdogs.com or text us at 717-814-8527 to request an online consultation to develop your dog’s winning training plan. 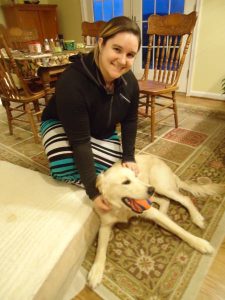 NextDog Training Case Study: Cat Aggression in a Puppy Mill Breeder Beagle MixNext
Gray House Trains
Where You Are
Check out our social media pages to find more information on our methods and techniques, the current progress of our clients, and testimonials from our wonderful Gray House families.
Facebook Instagram Medium